0
Food and wine route by bike:The places of the flavors of Salento
08 May 2018
Next

Coastal Towers route in north of Gallipoli by bike

Length of the Route: about 45 Km 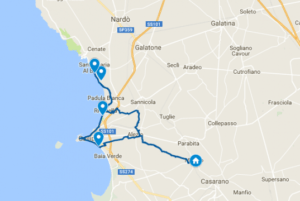 So outstretched towards the sea, so exposed to the dominations, so fought for its geographical position, but at the same time welcoming and open to new cultures, the Salento peninsula has always had to deal with the numerous assailants. By cycling in some cities of Salento, you will be amazed by the mighty messapic walls and the great number of coastal towers scattered along the coast but also inland as part of the structural complex called “masseria”.

The coastal towers were made up first by the Romans, then by the Byzantines, with the purpose of defending themselves from the Lombards and finally reused also by Charles V, in 1500, against the Turks and Saracens’ invasions. In this cycling route along the north coast of Gallipoli, together with Bikeitalia.it, we will cross particular landscapes, at the foot of a “montagna spaccata” (“cracked mountain”), on the slopes of a breathtaking cliff on the sea, or dipped in a pine forest. 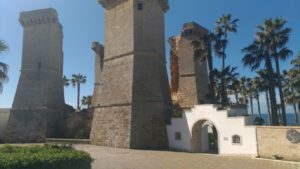 The starting point is our Locanda, after checking in our bikeroom that our bikes are affixed and have the standard equipment. We proceed through the  “wine and food route” from Matino to the sea from us proposed. Then we will arrive in Santa Maria al Bagno to explore Torre del Fiume Galatena (the Galatena River Tower). This area was often attacked by pirates, because there was a source of fresh water, and for this Charles V had built the tower of the height of 16 meters, with a pyramidal trunk , a square base, and angular bastions with pentagonal plan. In the past, in the upper part there was a string course with corbels.Soon after it was built, the central part of the tower collapsed, due to some enemy attack or telluric phenomena, and since today only the four angular bastions remain, it is also called “the Four Columns tower”. 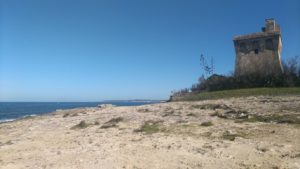 Very close there is the Torre dell’Alto Lido in Galatone, near the “Montagna Spaccata”(“cracked mountain”),built at 71 meters above sea level, with a truncated conical base and a cylindrical top body separated from the base by a curb. To reach it we should leave the bikes downstream, in the special bike racks. Around the tower we can walk the staircase that leads us to the upper floor. In the surroundings of this tower flint, ceramics and obsidian artifacts dating back to the Neolithic have been found. These findings testify the presence of ancient settlements in these lands.

We continue along the coast towards the Torre Sabea or “Torre della Punta Spea”, became a military garrison in 1750 with the function of monitoring the arrival of foreign ships. This tower is linked to a love story of 1500, between one of the soldiers who guarded the tower, Flavio, and his wife, Florilanda. According to the legend, the young wife reached the tower, to see her beloved husband. In the middle of the night, after abandoning the tower to return to the city, she lost her way and decided to return to her beloved. The soldier however did not recognize her and believed she was an enemy, so he killed her with the sword.

The last but not the least tower is located in Lido San Giovanni, in Gallipoli and it is the Torre La Pedata, with a truncated-pyramidal shape with a square plan, and at the top three trenches on each side. This tower communicated to the north with the southern defenses of the city of Gallipoli and to the south with Torre Pizzo. Today it is home to a marine biology station and you can visit the interior, divided into two floors connected by a wall staircase. 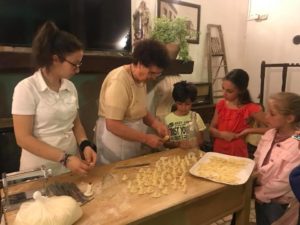 At the enf of your route, in our Locanda, we organize workshop of pizzica pizzica dance and of “orecchiette e minchiareddhi”( two kind of pasta) and a special dinner on our restaurant on roof.